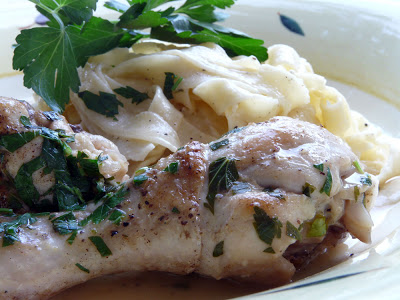 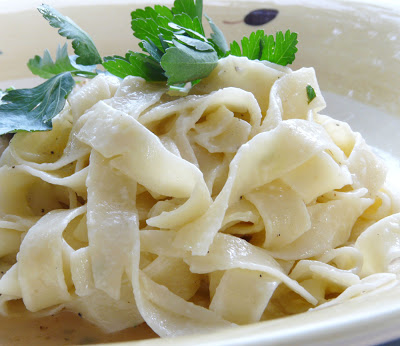 Another work day , another easy to put together after work dinner.

Pollo alla Marengo with a side of pasta. Very simple pasta too. Just put the cooked, drained pasta back into the pot, add a chunk of butter, a minced garlic clove , a little cream if needed, a little salt and lots of black pepper and fresh grated parmesan cheese. That is all there is too it. TIP: Use a microplane to grate the garlic right into the pot). This is pasta is wonderful as a side for chicken or veal piccata.

On the eve of the battle of Marengo, Napoleon’s cook was unable to find the chuck wagons in the confusion and was forced to improvise, using stolen hens. The dish became known as chicken marengo, and tis said that Napoleon always enjoyed it, less for iteself than because it reminded him of a glorious victory.

Chop a young chicken into pieces at the joints. Saute it with 2 tablespoons butter and 1 of oil, season it with salt and pepper, and a pinch of nutmeg. Once the pieces are browned on all sides, drain off the fat, dust the meat with flour, add a minced clove or two of garlic, and add 1/2 cup of dry white wine. Add about 1/2 cup of broth over the chicken to keep it from drying out, cover it, and simmer it until done. Before serving it, sprinkle it with minced parsley and squeeze half a lemon over it.