Lori of All That Splatters is hosting this week’s Saturday Blog Showcase.
If you would like to participate just prepare a recipe that you found on another blog and share it on your  blog.

This week on the Saturday Blog Showcase  I’m  highlighting  a recipe  that I found on a blog new to me  – Week of Menus.  Joanne, the author of this blog,  shared her mom’s recipe for Firecracker Shrimp.  I saw her photo for the shrimp on Tastespotting and knew that it would taste as good as it looked and I was right.   Moe stopped at the fish market in Cowichan Bay and picked up a pound of my favourite local Spotted Prawns.

I followed the recipe almost to a T including preparing the prawns, as demonstrated, by cutting off the little legs and butterflying.

Although I only used one pound of prawns I used the full recipe for the sauce.  Rather than a red bell pepper I went for spicy and used a hot red chili. 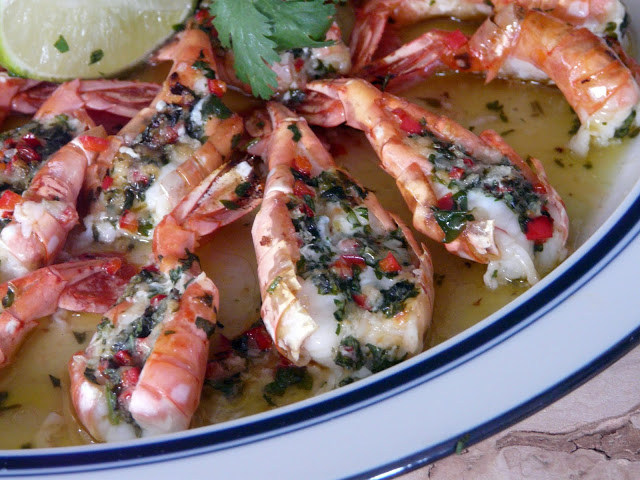 We made a full meal out of the prawns. The only side was the homemade baguette that we used to sop up all the wonderful garlic sauce.
This is a recipe I will be making often.  But next time I won’t leave the shell on the prawns.  I’ll butterfly with just the tail left attached. 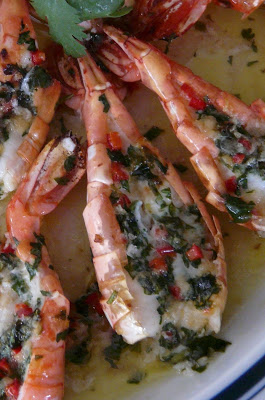 Arrange oven rack so that it is closest to the heating element. Preheat oven to broil. 450°F. Place prepared shrimp evenly on oven proof dish, so that there is only a single layer and every shrimp will get maximum heat.
Spoon sauce over each prawn and place under broiler.
Turn baking dish once or twice for even cooking.  Only takes about 3 to 5 minutes depending on size of prawns.