Canada’s Thanksgiving is long past and I probably won’t cook a turkey until Christmas.  But the American Thanksgiving had me craving a turkey dinner. Had to settle for a roast chicken dinner with cornbread stuffing.

Did some prep work before leaving for work Friday morning.  Baked cornbread and left it out to dry and I sauted the onions and the celery for the stuffing.   Also peeled and cut up the rutabaga.  Moe had the oven preheated and the chicken at room temperature , ready to go into the oven as soon as I got home from work.  The chicken had been presalted on Thursday and then uncovered and left to air dry in the fridge Friday.

The chicken only took 45 minutes at 500°F and the stuffing was baked in a little counter top convection oven.   Dinner was ready in an hour. 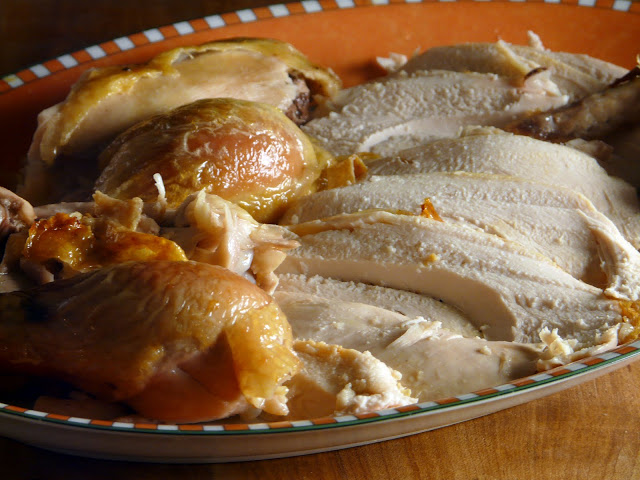 Saturday night’s dinner made use of the leftover cornbread stuffing.  Chicken Ballotine

On the way home from work I stopped and picked up chicken breasts.  I boned  and pounded them flat and  then stuffed them with the cornbread dressing.  Quickly browned on top of the stove and then finished in the oven.   Another quick dinner.