I fed my starter on Tuesday,
but didn’t want to take the time to make a biga (preferment)
so I just tossed some of the discard into
1000g of flour along with 3g of yeast
and 700g of water and 27g of salt.
Did the usual autolyze, stretch and fold
mix method  over a three hour period
and  after the last stretch and fold the
dough went into the fridge overnight.
Was in the fridge for a little more than 24 hours.
I worked Thursday so
Matt pulled it out of the fridge mid afternoon Wednesday
so that the dough would have time to come to
room temperature and start to rise before
I got home.
The dough was quite active.  I had to knock
it down before bed Tuesday night and again
Wednesday morning as it was threatening
to blow the lid off the container.
Next time I make it this way I will
add 2g of yeast or maybe less. 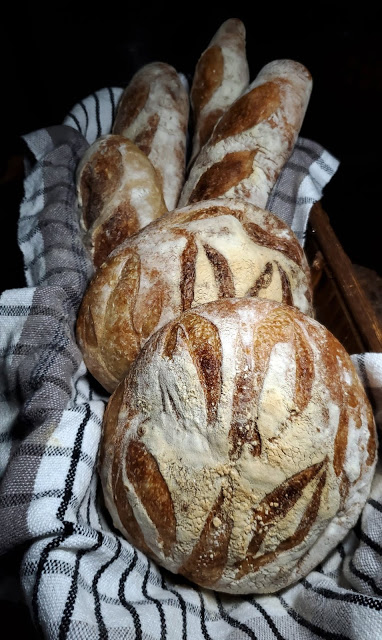 I baked two boules and four baguettes
and left enough dough left for a small pizza.