Skip to content
I hope you will join Lori (All that Splatters) and me this week and share a recipe found on another blogger’s website.   A good way to share favourite blogs and new recipes.
Guidelines to participate in the Weekend Blog Showcase can be found at the bottom of this post 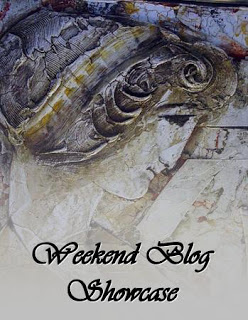 I bought a slow cooker. Something that I never felt the need for before and to be honest I’m not sure I really have a need for one now.  I was seriously considering buying a pressure cooker so that I could make stews and pot roasts and braised lamb shanks etc… quickly after getting home from  work.   But then I started thinking that I have lots of time in the morning and I often start something for dinner before leaving for work.   I’m a morning person and I’m usually up between 5:00 and 6:00 AM and I don’t have to leave for work until 9:30.   I don’t mind putting a pot roast in the oven but that only works if Moe is going to be home to take it out three or four hours later.
After doing a little homework I settled on a Nesco 6 quart roaster.  Unfortunately for me, I couldn’t find one here on the Island.   Apparently they are really common in the US but not so much in Canada.  I really like the idea of the Nesco because you can control the temperature.   The next choice was  the Hamilton Beach  33966 Programmable Slow Cooker which got great reviews.  Not what I really wanted but lucky for me the Canadian Tire store had this model on  sale this week at half price.   I figured I would give it a try and still keep an eye out for the Nesco.

My test run was going to be a beef stew.  Instead though I decided to make a slow cooker Stroganoff that I found the recipe for on a cute little blog  – Houseboat Eats. 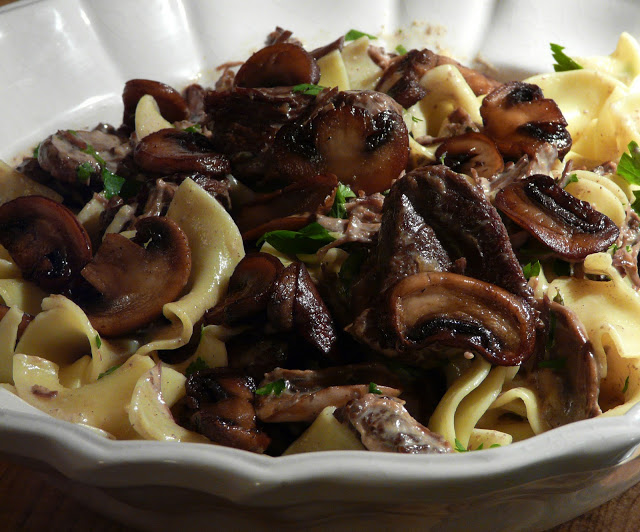 This blog is  hosted by a husband and wife, a young couple – Talley and Beryl.  The recipe was from one of their posts back in December 2009. The picture of  Talley’s Stroganoff is what did it for me.
A very different stroganoff recipe than what I have made before.   The recipe was inspired by one of  Thomas Keller’s recipes.
Where Talley used Short Ribs, I used Stewing Beef.  I browned the beef  and it went into the slow cooker along with sauted onions and celery, garlic, fresh thyme and beef broth.  Set the timer for nine hours and off I went to work.   It probably would have been smarter if I had done at least one test drive before going off and  leaving the slow cooker on all day. Just for my peace of mind.  But all was well and the meat was fork tender and ready to be transformed into Beef Stroganoff.
I served the Stroganoff over noodles.

Inspired by Ad Hoc At Home
Talley and Beryl

There is a fair amount of multitasking that occurs just before this dish is served, so you are definitely encouraged to read through the whole recipe before beginning 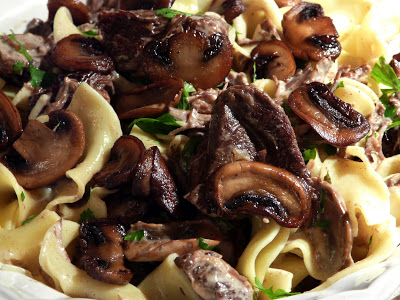 Dry the short ribs with paper towels and season them generously with kosher salt and freshly ground black pepper. Heat a skillet over medium-high heat and add canola oil. When oil shimmers (or use this trick), add your ribs and sear on each side until the outside is nice and caramelized. Remove the short ribs and place them in the slow cooker. Pour off all but a tablespoon of oil in the pan. Add the onions and garlic and sautee gently at medium heat for about 4 or 5 minutes. Add half the red wine to deglaze the pan and reduce the wine slightly. Add the remaining wine and the stock and bring just to a simmer. Transfer the contents of the pan to the slow cooker, add the thyme and peppercorns, cover and cook on low until very tender (mine went for about 9 hours).
When tender, remove the meat from the slow cooker and let cool at room temperature. If desired, reserve the cooking liquid for another purpose. Meanwhile process the mushrooms in a food processor or chop until finely chopped. Melt the butter in a saucepan over medium heat. Add the onion and cook until translucent, about 5 minutes. Season with salt and pepper. Add the chopped mushrooms, increase heat to medium high, and cook, stirring occasionally, until all the liquid has evaporated, 10 to 15 minutes. Pour in the cream, add the sachet, and bring to a boil. If you want to take your eyes off the pan, you can prevent the cream from boiling over by placing a wooden spoon across the top of the pan. Reduce the heat to keep the cream at a simmer and simmer for about 35 minutes, until the cream is reduced by about one-third and infused with the mushroom flavor.
Meanwhile, heat a large frying pan over medium high heat. Add the butter and the canola oil and heat until the butter melts. Add the mushrooms, season with salt and pepper, give the pan a shake, and then cook without stirring for about 3 minutes, until the first side is golden brown. Turn the mushrooms and cook for another minute or two, until golden brown. Cook the mushrooms in two batches if necessary to prevent overcrowding the pan. Remove mushrooms from the pan, cover with foil, and reserve.
When cool enough to handle, chop the short ribs into large rough pieces and let sit at room temperature.
When the sauce is ready, remove the sachet and blend the sauce in a blender until smooth. Strain into a saucepan, set over medium-low heat, and stir in the crème fraîche until incorporated. Reserve a scant ¼ cup of the sautéed mushrooms and add the remaining mushrooms to the sauce. Season to taste with salt and pepper and keep covered on low. Don’t worry if the sauce is thick, we will thin it later with pasta water.
Bring a large pot of salted water to a boil. Add the egg noodles and cook until al dente. Reserve a cup of the cooking water and drain the pasta. Transfer to a large bowl and toss with the butter.
Place the short ribs under the broiler for about 1 to 2 minutes to crisp the outside. Keep a close eye on them as they can burn quickly.
Toss the noodles with the cream sauce. If the sauce seems too thick (and it probably will), add a bit of the reserved pasta water to thin as desired. The starch from the pasta will maintain the silkiness of the sauce as you add the water. Arrange the noodles on a platter and top with with the remaining sautéed mushrooms. Arrange the short ribs on top, sprinkle with gray salt or coarse sea salt, and garnish with parsley.
Serves 2, but scales easily

To participate in Weekend Blog Showcase:

That’s it.  Leave a comment if you’d like.  We always love comments!  Thanks for joining in on the fun!