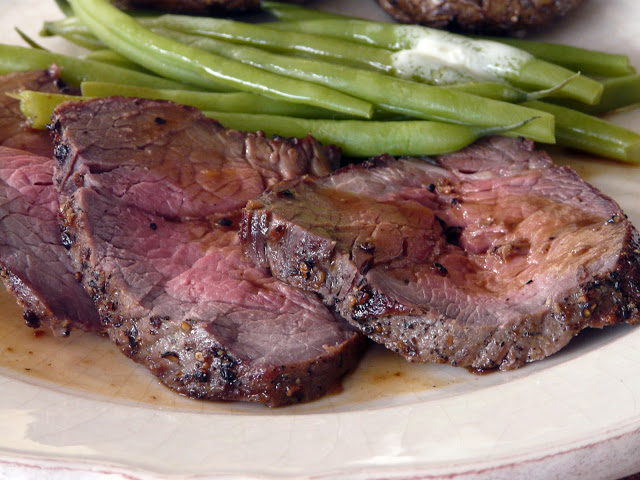 I roasted a small sirloin tip roast for dinner last night.  The beef had been presalted on Monday.  I uncovered it early Tuesday morning so that it could air dry.

Usually I serve roast beef with mashed potatoes, but, decided to go with David Leite’s recipe for Punched Potatoes.
I was recently gifted  David Leite’s book – The New Portuguese Table.   Beautiful cookbook with lots of mouth watering photos as well as great sounding recipes.    I’ve earmarked quite a few to try sooner rather than later.

The recipe calls for small Yukon Gold potatoes, but I always use Russets for baked potatoes and I had just picked up a bag of baby russets so that’s what  I went with.
Baked potatoes are a favourite of Moe’s so I thought he would really enjoy this recipe.   The potatoes are baked  (I rubbed the washed potatoes with oil and then rolled in salt before baking) and then pressed/punched  down to flatten slightly and then drizzled with garlic and olive oil.     I thought that they were really good, BUT Moe missed the butter, his preference for baked potatoes so next time I’ll cook the garlic until golden in butter instead of olive oil.