Started a Biga just before 6:00 AM Monday morning.
In less than four hours it had more than doubled.
The Biga was made with  1 1/2 cups flour, 1/2 teaspoon yeast and one cup of water.
The Biga went into a 12 cup batch of dough.
11 cups of bread flour and one cup of whole wheat. 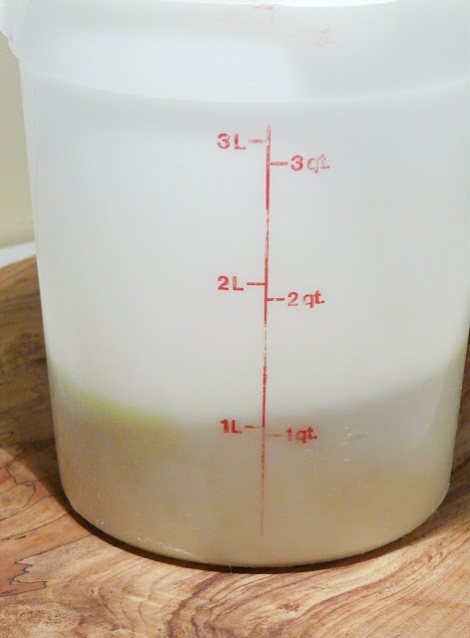 After kneading, the dough was divided with a third going into this pail
and 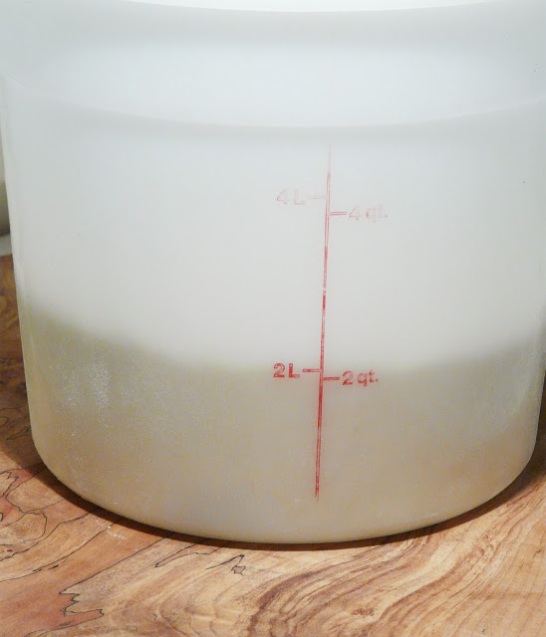 Two Thirds into this pail.
After the first rise, this pail went into the fridge for a long cold
fermentation.

After the first rise, the dough in this pail was knocked down and then
left for a second rise.

Tipped out on to a floured board

and shaped into three baguettes.

The baguette in the middle was 21 inches long.
It went into the oven first because it needed to be placed diagonally on the stone.
After baking for about five minutes it was firm enough to move over to make room for the two remaining baguettes.
While the bread was baking I roasted a red pepper on the grill.
I needed a little roasted red pepper to make
Tuna Pate. 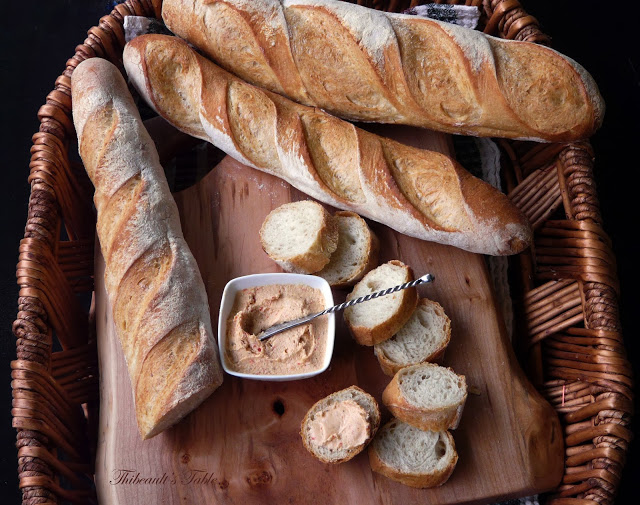 To have as a late lunch with slices of baguette.
Wednesday
Took 1/3rd of the remaining dough out of the fridge at 6:00 AM today
and left it on the counter to come to room temperature and rise again.

If you are looking for a great baguette, you can’t go wrong with Julia Child’s Baguette Recipe.

I’ve made a number of adjustments to the original recipe,  so the recipe I use now doesn’t really resemble the original.  I’ve noted my changes in red.

Place the flour, yeast and salt in the bowl of the food process. Pulse to mix. Add 1 1/3 cups of water and process until the dough comes together. If the dough doesn’t form a ball, add a little of the extra water. Process for about 60 seconds, turn off machine and let dough rest for 5 minutes.

Turn on the machine again and rotate the dough about 30 times under the cover, and then remove it to a lightly floured work surface. it should be fairly smooth and quite firm.

Let the dough rest for 2 minutes and then knead roughly and vigorously. The final dough should not stick to your hands as you knead (although it will stick if you pinch and hold a piece); it should be smooth and elastic and, when you hold it up between your hands and stretch it down, it should hold together smoothly.

Preliminary rise – 40 to 60 minutes at around 75°F. Place the dough into a clean dry bowl, (do not grease the bowl), cover with plastic wrap, and set in a warm place free from drafts. (note the French do not grease the bowl because they believe the dough needs a seat to push up from). This first rise is sufficient when the dough has definitely started to rise and is about 1 1/2 times its original volume.

Turn the dough onto your lightly floured work surface roughly and firmly pat and push it out into a 14 inch rectangle. Fold one of the long sides over toward the middle, and the other long side over to cover it, making a 3 layer cushion. Repeat the operation. This important step redistributes the yeast throughout the dough, for a strong second rise. Return the dough smooth side up the bowl; cover with plastic wrap and again set to rise.

Final rise in the bowl – about 1 to 1 1/2 hours or longer. The bread should be 2 1/2 to 3 times its original bulk. It is the amount of rise that is important here, not the timing.

Cut the dough in half. Set one piece aside and cover with a towel.

On a lightly floured work surface pat the dough into a 14 inch rectangle, squaring it u p as evenly as you can.

Fold the rectangle of dough in half lengthwise and using the heel of your hand, firmly press the edges together whether they meet. Seat well. Pound the dough flat. Now repeat – patting the dough out again and folding it over and sealing the edges. Pinch the edges well and Rotate the dough so that the sealed edge in on the bottom.

Repeat with second piece of dough.

Cover with plastic wrap or loosely with a towel and let rise to more than double again at about 75°f.

Place stone in oven and Preheat oven to 450°F. Slash three long cuts into the loaves and place on the hot stone. Spray loaves with water and immediately toss a number of ice cubes on to the bottom on the oven to create steam.  Spray again two or three times, 3 minutes a part.  Bake until bread is golden and has an interior temp of 200°F. Takes about 30 minutes.

Making Dough in a Mixer or by Hand

When you are making dough in an electric mixer with a dough hook, proceed in the same general way with the rests indicated, and finish by hand. or mix the dough by hand in a bowl, turn out on a work surface, and start the kneading by lifting it up with a scraper and slapping it down roughly for several minutes until it has body. Let it rest several minutes and then proceed to knead.

MY NOTES:
I use a Magic Mill to do most of the kneading.  The Magic Mill can handle over 20 cups of flour at one time.


I use 4 cups for a single batch and 8 cups for a double batch Plus the addition of a Biga.     I prefer a wet dough so I add more water.
I usually start this bread with a Biga (Italian)/Poolish (French) a pre-fermentation. Made the night before.  Contributes to a more complex flavour and a better texture. 1 1/2 cups flour1/2 teaspoon yeast1 cup of water.
Mix well. Cover and set aside.

Other changes:  I mix the Biga, Flour, Yeast and water together,without the salt,  and let sit for 20 to 30 minutes to allow the flour to absorb some of the water.  I add the salt after this rest, and then finish by kneading.
This dough makes for a wonderful pizza crust.  Place dough in fridge and leave it for two to four, even five days.  Take it out early (three hours) to give it time to come to room temperature.  Allowing the dough to have a long cold fermentation really develops the flavour and the texture of the bread.

EDITED NOVEMBER 2012:  I now  reduce the amount of yeast called for in the original recipe.  When doubling the amount of flour to eight cups of flour and 1 1/2 cups of biga, I use just three teaspoons of yeast.