We moved last year and the sourdough starter that I had been babying for two years died. My fault. I finally got around to starting a new “mother” the end of last week. It was finally ready to use. So last night I made a biga and a levain using some starter and this morning I used the levain to make two of Amy’s Bread’s Country Sourdough Boules and the biga for two sourdough baguettes. Both doughs were left to rise in the fridge for almost 9 hours and then left to come to room temperature for almost three, before being shaped. The last loaf came out of the oven around 9:30 PM tonight. I had forgotten just how much better bread made with sourdough starter and given a slow rise is. 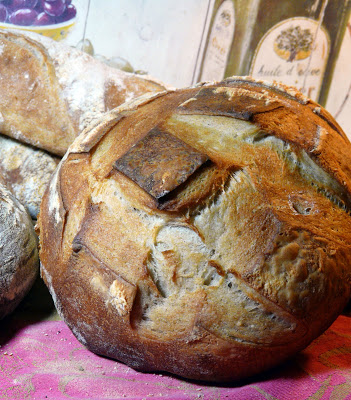